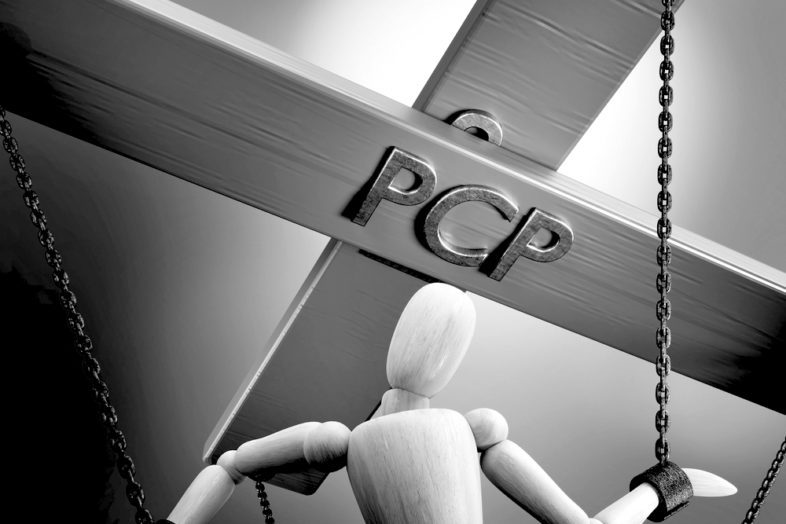 What you see on Training Day and Friday with the main characters smoking PCP is real!

PCP addiction is one of the most serious with lasting effects that can permanently alter a user’s brain and change their life forever.

We interviewed ‘T’ from the Southside of Chicago who accidentally smoked PCP and how it changed his life.

Don't go through the process of recovery alone. There are people who can help you with the struggle you're facing. Get in touch with one today.

PCP is a hallucinogen that creates delusions in reality for the user. Using it induces a dissociative anesthetic state of reality detachment. The drug was originally introduced as an anesthetic used in hospitals, but was discontinued in 1965 because of its horrid effects on people. The chemical is a crystalline powder but can be dissolved in liquid form, and that is how people smoke the PCP. According to SAMHSA PCP emergency room visits increased 400% between 2005 – 2011.

I suffered depression in high school and tried to commit suicide a few times. Soon, I found out the pleasures of smoking weed that took the pain away.

But, I quickly found out that weed don’t in fact take the pain away, it just makes you ignore it. The problems are still there.

My father was an ignorant motherf*cker. He verbally and sometimes physically abused my mom, verbally abused me, treated me like an outcast, and I believed he treated me differently from my other siblings because they were mentally handicapped. Therefore, they didn’t protest about his attitudes, and they were bringing in money from their disability check that he used to ‘buy out the bar’ and get ‘high’. Seeing this everyday made me lose depressed, interest in school, and search for other ways to give my life meaning.

One day my father pushed me off the edge. He said the wrong thing that made me get so mad at him that I stormed out of the house, and stolen one of his joints from out the astray on the way out.

Before this day, I didn’t smoke for a whole six months because I was in the middle of trying to quit weed. But he brought me back to it.

I smoked that joint and got higher than I have ever been before. I got so high that everything became scary. Like I was going to die. Every second felt I was going to get shot with a gun.

I was on my way to a friend’s house so we can go to the library and hang out. It was the only free place I can lounge around away from the home at the time. When I got to my friend’s house, her uncle would not let her go out with me. Apparently, he could see I was higher than a kite.

2 hours later on my way back home the high wears off, but I can still feel the stuff in my system. 2 days later, I felt normal as usual, but on the third day my heart started racing out of nowhere, my breathing gets shallow, and that feeling of ‘death’ overcame me again. This time my whole consciousness and reality disappeared for a moment. I became ‘high’ all over again without smoking anything. I thought to myself what was wrong with me? This has never happened before.

Three days after that (6 days after smoking the joint), the same thing happened. My heart started beating rapidly out of nowhere, my consciousness disappears but I’m still woke, I’m still functioning, but I can’t see anything. I started breathing hard again, and felt like I was high again.

These episodes continued over the next several months. During this time, some of these episodes would have fireworks exploding in the center of my brain. Rain felt like needles hitting my skin. I could see the vein in my forehead strumming in sync with my heart beat. All of this stuff was uncontrollable, scary, and started after I smoked that one joint.

I knew something was wrong with me, and went to the hospital. They did some blood and urine tests and found nothing. Three months later these episodes continued to happen, so I went the doctor again, and, as usual, they found nothing in my system! I stopped going to the doctor because I didn’t want them to think I was crazy and land in a psychiatric facility.

I knew I had to deal with this on my own. These ‘high’ episodes would not stop. So I did what I could only think to do: go to the library and research what I had smoked.

I read books, internet articles, researched different types of drugs to figure out what I had smoked. I even asked my father what was in that joint and he ignored me like I was speaking a foreign language. He was in complete denial that I even got the joint from him and that hurt me a lot.

The joint was lying in an astray. I learned that PCP smokers will use tobacco to mask the bitter chemical taste of PCP. I remember while I was smoking the joint it had a high chemical taste, but I ignored it because of the tobacco.

PCP stays detectable in the body for 72 hours. That explained why the hospital could not find any drugs in my system even though I kept having these ‘high’ episodes.

PCP stores in your fatty tissues, like weed does, and slowly releases into your blood stream throughout the months up to years. You can even pass the PCP chemical through the sperm or egg when conceiving a child. I remember reading a story about a police officer who checked a suspect for drugs and got pricked by a needle loaded with PCP. He got high and had flashbacks years later just I did, and his newborn child was found with PCP in its system.

PCP can cause someone to have severe mental issues as well. Some people who have smoked PCP get so scared of it they jump out the window. Some run naked down the street screaming curse words and hallucinating. I felt a driving force to rapidly bang my fists on top of my head and scream. Sometimes it felt like bugs crawling on my body and I would scratch the center of my chest like a crackhead. I learned super quick that if you are weak-minded, PCP will damage your mind forever and you will land in a mental institution for a very long time if you survive it. It seems to change the brain’s chemistry forever.

Do you remember in the movie Friday when Smoky was sitting in Debo’s chicken coop tweaking out after he smoked those PCP-laced joints with the Mexicans? That scene is fantasy depicting reality. Even though the movie is a comedy, that stuff is real and it’s not funny. PCP will have you feeling like that.

In the movie Training Day when the cop smoked a joint that he got from the college kids who bought it from the barrio, the ‘high’ intervals he experience are real. PCP does to you.

How am I now? I notice that I am different from before I smoked that one joint. I feel a bit ‘off’, but still normal. They say PCP changes you; I think it does. However, there’s a silver lining and a shining lights through the clouds. I haven’t smoked anything – no cigarettes, no weed, no nothing – since then. I never smoked anything after that one joint. That’s how much it scared me.

This experience happened when I was around 19. I’m 36 now.

People wonder why I am totally against smoking marijuana, because I myself started off smoking weed and accidentally smoked PCP because of it.

My aunt, who is a heroin addict, told me to drink warm milk to relieve the effects of PCP. I did it, but I can’t tell you if it actually worked. Maybe it gave me a placebo effect of working. However, keeping my mind busy and staying away from too much stress helped relieve the effects. I learned that taking Turmeric works for me when I feel a panic attack coming on.

I still have panic attacks every blue moon and when it happens is the scariest feeling in the world. I would scream out “no!” and “Please God!” My reality/consciousness would disappear, but not as bad as it did 20 years ago.

I could feel panic attacks coming on when I think or talk about them like I am now. That’s why I hate telling this story. I had one while writing this article. One time I couldn’t even finish watching Fear and Loathing in Las Vegas because it triggered a panic attack. The movie reminded me so much of that time I got high on the PCP.

I urge you to stay away from drugs, anything that alters your senses: liquor, weed, drugs, cigarettes.

I really hate to think, say, and write this; but maybe God put me through that so I can quit smoking forever and live a productive life like I am living now.

If you want to know more about PCP, read our article about PCP addiction treatment.

If you need help finding a PCP addiction facility, check out this list.

Don't go through the process of recovery alone. There are people who can help you with the struggle you're facing. Get in touch with one today.